– Extention and modernization of an electrical installation with modern equipment, such as transducers;
– Connection to computer systems. 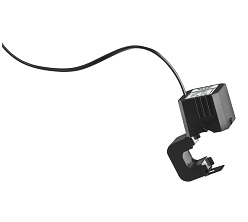 Assembly can occur without closing down a part or the entire company. The split core current transformer is simply attached to a busbar or cable without dismantling the electrical installation and/or various wirings and cables.

Split core current transformers must be mounted with the utmost care. Particularly the ground surfaces of the iron core are extremely sensitive to damage and dirt. Therefore, prior to mounting, check if the ground surfaces of the iron core do not risk being damaged by for example tools lying about and if there are no dirt or dust residues between the surfaces. Avoid touching the core surfaces with your hands whenever possible.

To prevent corrosion the ground surfaces have been greased against dirt. If dirt should still have deposited on the surfaces, the surfaces must be cleaned and the next be provided with a new very thin coating of silicone paste. Split core current transformers are intended for use in dry areas. Condensation is to be avoided.